‘Twas the night before Christmas, when all through the States. 10,000 puppy mills were stirring about behind large gates;

The automatic feeders were hung on dirty wire without a care, In hopes that inspectors would soon not be there;

The dogs were crammed, all snug in small sheds; While visions of soft beds danced in their heads;

And mammas and daddies were in cages not too deep, Just wanted some warmth for a long winter’s sleep,

When out on the farm there arose such a clatter, They tried to spring from the cage to see what was the matter.

Away down the road they saw a quick flash, A car door opened and a team came out in a dash.

The smile on people gave them so much hope, That they didn’t mind when they started scrubbing them with soap.

A few days later in front of their wondering eyes did appear, But a team full of rescues to make their old life disappear.

With a little old driver so lively and quick, They knew in a moment he must be St. Nick.

More rapid than puppies the plans happened like a dream, And then they all realized they were just saved by the Puppy Mill Rescue Team!

Carolyn P-Duffy now Quincy wasn’t a mill dog…he came from the Buffalo shelter but we saved him because he was posted in the mill group. He has fear issues but is conquering them and was able to get his picture with Santa

Carolyn -Lily the cavapoo who leaked urine as a puppy. Enjoying her first Christmas with her border collie sisters 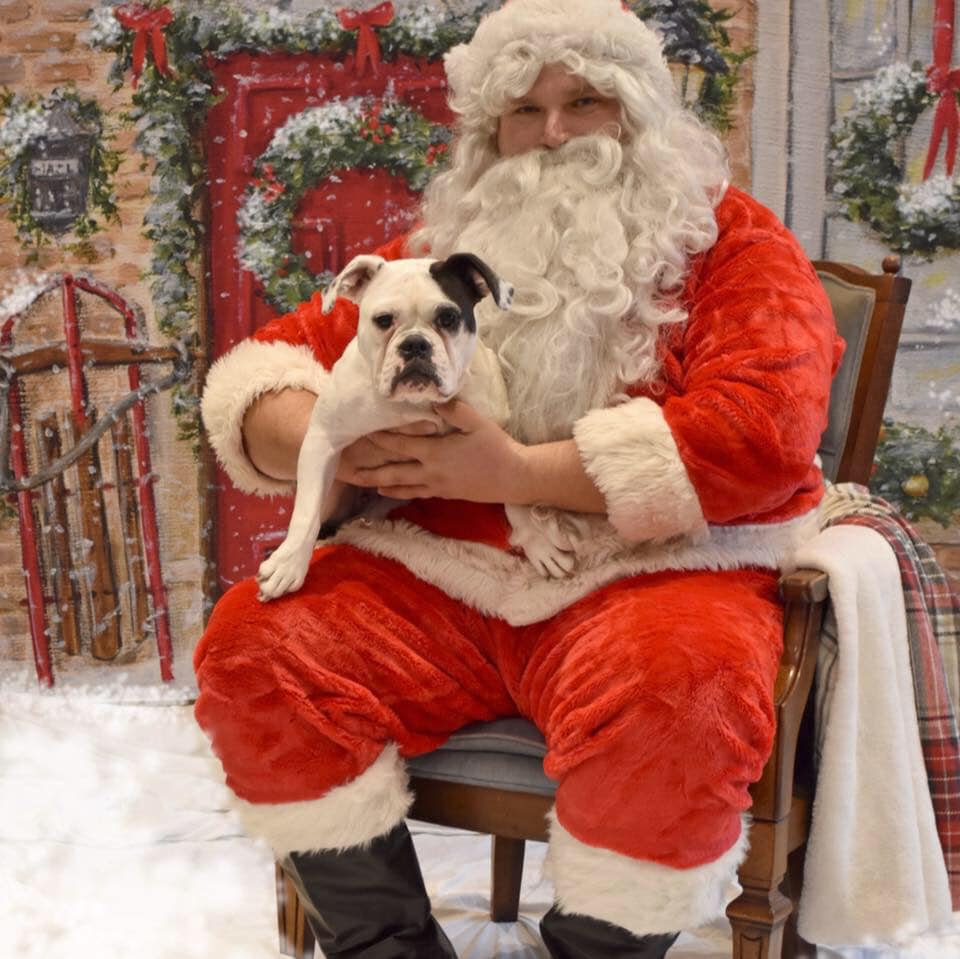 Kristin – Ryder was one of the boxer x puppies pulled. Here he is in new home for the holidays

Cynthia M- This is my little Mill Baby, she was so scared and untrustworthy, that I was afraid there may not be any hope for her. Well Carley is the most dedicated friend I have ever had. I’m not sure what I did before her. She loves to go on the boat, camp and most of all sleep in our bed at night. I think her favorite thing is waking me up in the morning to go outside, sneaks up and licks my face every morning.

Carolyn P- Maddie Rose was adopted by our volunteer driver who brought her to me upon her release. He was instantly in love and had to be pulled from my car so I could get on my way going home lol

Carolyn P- Greta the bull Mastiff had some behavior issues. We got her some training and her foster mom ended up adopting her

Deb S – Shared with permission, this is the scared Beagle mix that just came Thursday. She was very scared & shy upon arrival but now has blossomed!

Carolyn P-Tammy (white) and Cornelia we pulled in two different runs. Adopted by the same family

Jamie R- Hannah, deciding if she should eat the tree or not.

Tatjana D- StoryTellers beabull she is settling in for the holidays in her foster home.

Tatjana D- Jetta, another beabull of ours, is ready for Christmas.

Kimberly N-Fiona, Beabull, Foster Fail, not mine i was their cm, celebrating her big brother Kobi birthday

Bev R-Cooper Christmas pic. He is Blitz brother, 2 pups saved after being dumped and terrified at a shelter and transported on PuppyMill Express! 1st Christmas with his loving family! <3

Lisa E- This was my mill rescue last Christmas Addie Mae. Praying for her forever family for Christmas

This site uses Akismet to reduce spam. Learn how your comment data is processed.